10 Advantages of Waterfall Model – When, Why, and How to Use It 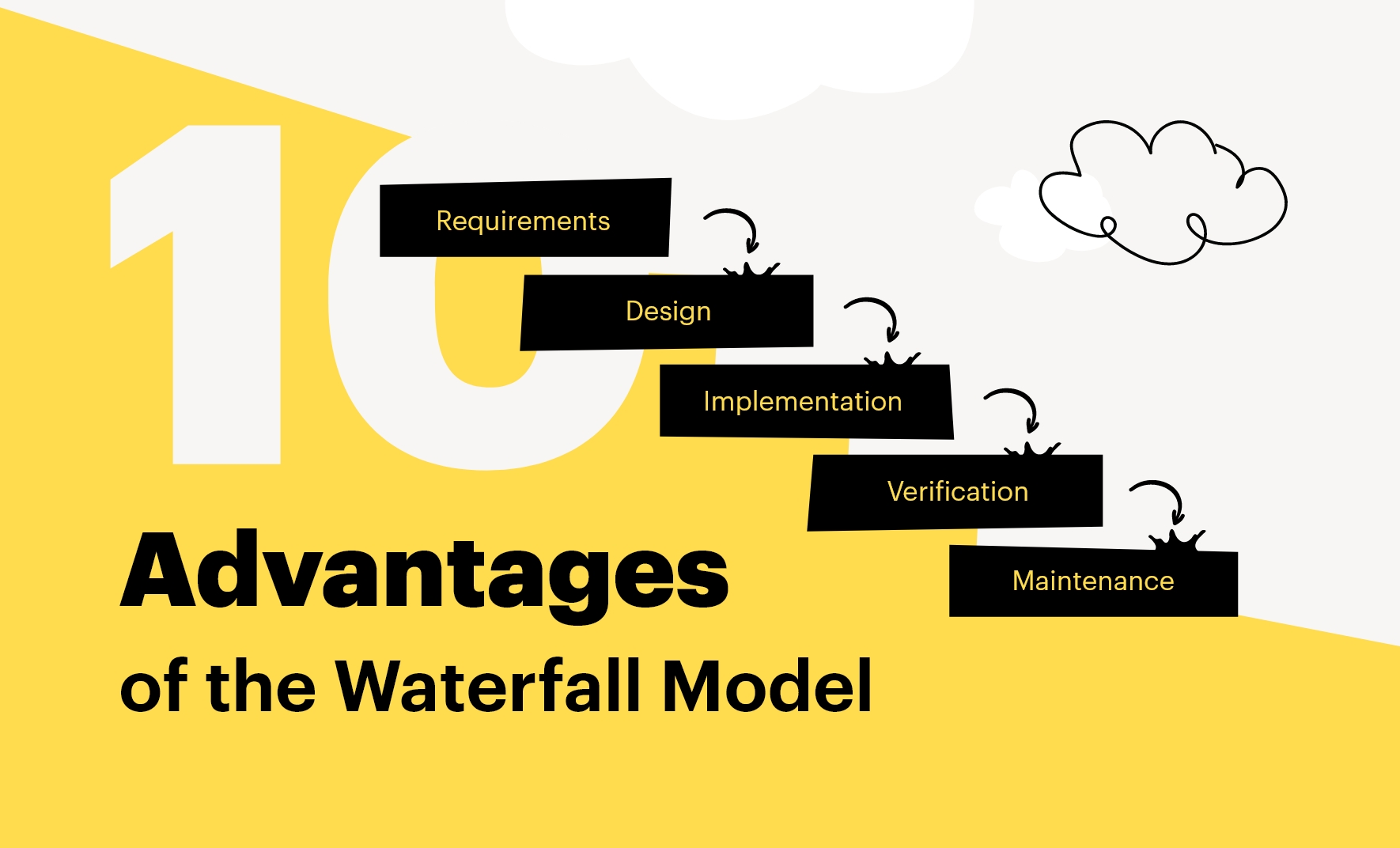 Whilst Agile methods of project management have been on the rise over recent years, Waterfall has still retained some of its loyal followers. There are several reasons for this, some are relatively passive- people don’t like change, they get used to one way of doing things, etc. But this doesn’t explain the full value of the Waterfall modal of project management.  There are some serious practical advantages of Waterfall over its more Agile competition. And it seems that Waterfall is having something of a resurgence.

Briefly – What is Waterfall?

Waterfall is a project management approach that functions on a step-by-step build-up from beginning to end, following a linear sequence of highly detailed preplanned stages. It is a system that has been in use for centuries, as a logical almost organic foundation for projects such as construction and manufacturing. With the rise of new fields of industry such as I.T, Waterfall as a system needed to become more formulaic to fit into project management theory. This happened originally back in the 70s but it has been adapted since then with the hope of fitting the new working processes and styles. 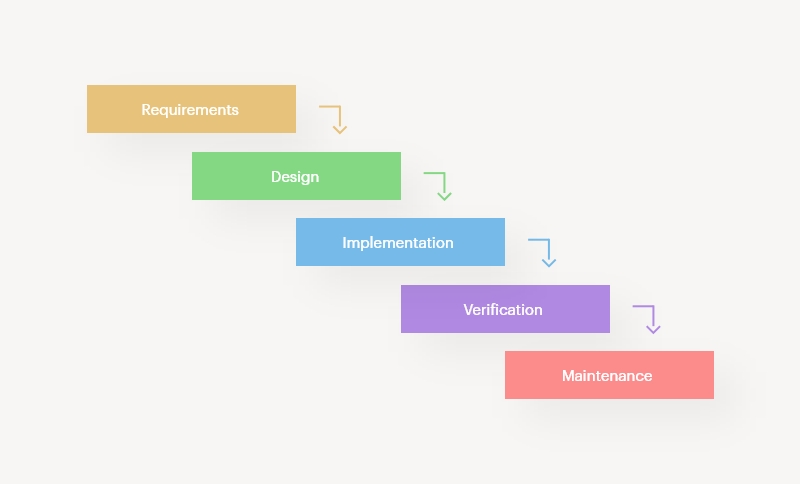 In Waterfall, preplanning is time-consuming but essential. Everything follows from the initial plan and the more accurate and detailed it is the more straightforward the whole process. The plan breakdown the project into a sequence of tasks and each task fully completed before the next task starts.

Whilst there are advantages of Waterfall, there are certainly some criticisms too.

The main criticism of Waterfall has been its inability to react to change, its inflexible structure and its need for concrete requirements. Its main rival Agile, in all its many forms, has gained enormous popularity in part because of its ability to react to change quickly and effectively. This is especially useful when the initial requirements of a project are likely to change or need significant adaptation during the course of the project’s timeline. It’s fair to say that certain projects are better suited to Agile if this is the case.

A further criticism is the lack of testing until late in the project cycle. A fault that occurs early in the process can be devastating and require a tremendous amount of work- and time,  to go back and fix and in turn fix everything that this affects. Of course, Waterfall cheerleaders would claim that faults are unlikely because of the immensely detailed planning but we all know mistakes happen, faults exist and bugs are missed. However, it is absolutely possible to use the Waterfall model base. Then adapt it to include testing along the way and not necessarily wait for the explicit testing stage. Although Waterfall is a model it is not set in stone.

One criticism of Waterfall sn that the process doesn’t really incorporate client feedback until it’s too late. This is seen as a high risk strategy, as the client can only see the actual product in the final stages. If they are dissatisfied it’s a real problem. Clients are invited to review milestone events but it can be difficult to understand. Can the client really see what is being shown as the focus is on the final product.

Again, Waterfall exponents would argue that detailed planning with the client should alleviate this problem but it’s not always that straightforward. How often does the initial conversation bring out what the client actually wants, sometimes he doesn’t even know himself, and if he does he can’t express the vision? But let’s be fair here Waterfall doesn’t ban client involvement throughout the process, it simply doesn’t deem it absolutely necessary. With good communication, the client can feel like part of the project all the way through and offer input.

It seems that many are happy to criticize the perceived disadvantages of Waterfall as a model for coping with projects in the modern age. However, there are some real and significant advantages of Waterfall. Many depend on the type of project but also your business structure and client requirements.

What we sometimes see as a disadvantage of can bend seen as one of the advantages of Waterfall. Proper thoughtful design and structure from the start with everyone sticking to that structure. Yes, waterfall requires detailed planning but the follow on from that is that there is a strong structural element that holds the project together, with everybody pulling or pushing in the same direction. In short, no chance of Agile chaos. Many businesses like a well-organized planned approach, and contrary to popular belief many employees enjoy the structure of knowing exactly what they have to do and by when.

Another of the advantages of Waterfall is that it starts at the beginning and progresses in a linear way to the very end. What could be more comfortable and reassuring. At the completion of each stage, there is clear and definite progress. Everybody understands the model, it’s part of our everyday experience of life. it makes sense to the team, it makes sense to the client.

As it is so intuitive, an advantage of Waterfall is that it allows you to start right away. You don’t need to assign specific roles, un training sessions and qualify for certificate or even bring in model specialists. Everybody can run with the Waterfall model.

From the very beginning of the project, there is a commitment to a clear and definite goal. Admittedly this could be a problem if the client isn’t clear about their wishes and demand or the requirements are not concrete. However, if the project has a clear deliverable goal Waterfall works beautifully. It allows that goal to be attacked in a focused manner without deviation from the main aim. Equally importantly the Waterfall model means that all the parts are joined together as they go along with the sole object of reaching that final result and so the project functions as one.

Hitting the schedule is another of the advantages of Waterfall. Detailed planning and stage-by-stage delivery mean a project should be easier to manage and hold-ups spotted quickly and easily. In which case, you can add additional resources to make up some time. What also helps keep to deadlines is that in Waterfall you do not expect any drastic changes to the original plan.

A further advantage of Waterfall is that as with the predictable timeline, the budget estimate should also be more accurate By setting out requirements clearly from the off,  time, resources, and work can all be factored in in the early stages.

Waterfall is a milestone development process. There is a definitive timeline of stages which equate to clear and ongoing progress towards the final outcome. Each stage has deliverables and each stage can be reviewed and clients involved in feedback.

A step-by-step process easy is to follow for all concerned. So the ease at which Waterfall can be implemented is a clear advantage as it’s predictability. The organized nature of Waterfall adds a value that is sometimes forgotten. There is no overlap between stages, the planners plan, the implementers implements and the testers test. This means that you can quite easily be running several projects at the same time with one team but at different stages of development. The QA can get on with their roles when required but can be getting on with other things in the meantime. It leads to clear roles and clear expectations without any fuss.

By now we know just how structured and well-organized Waterfall is as a system. Another great advantage of Waterfall is that it is heavy on documentation. Whilst this may make the Agile fans shake their heads, we shouldn’t just see this as paperwork for paperwork’s sake. The documentation means the transfer of information is relatively seamless. New team members, changes in personnel, personnel illness or absence, even a completely new team can and do affect the efficiency of a project.  When you have clear, accurate well-documented information, then these potential problems are so much easier to deal with.

Let’s address the elephant in the room as far as Waterfall is concerned. It is not flexible enough to be relevant in the modern project management world. Clients don’t know exactly what they want until they see it. They will want changes, additions maybe even a complete redesign – Waterfall just can’t cope.

Ok, so Waterfall doesn’t cope particularly well with constant changes throughout and curveballs thrown in during the working processes and if this really is going to be a likelihood then go Agile. But at the beginning Waterfall is all about the plan, and the plan can change as many times and as dramatically as it often does in this stage without any issue whatsoever. The planning doesn’t involve putting the plan into action but it is detailed enough and collaborative enough for the client to have the input and fully understand what’s coming. Alterations and changes at this stage are simply a matter of negotiation and agreement. No big deal at all.

Do the advantages of Waterfall outweigh the disadvantages?

Out of fashion maybe, but fashions swings in circles and Waterfall is coming back. It is fast, efficient and very, very easy to implement. It doesn’t work for everybody, in every situation and it doesn’t claim to. But for certain projects, there are clear advantages of Waterfall. It is an ideal no-fuss solution. Especially suited to small teams, and predictable and well-defined projects. No need for endless daily meetings and updates.

And Waterfall is a model, a method – it is not set in stone. It offers a straightforward, fundamental base from which you can customize for your own specific business or each individual project. If your client demands greater input, or more testing during the implementation-just build it into the plan. If you think you need a more flexible approach, add that too. You should not be bound by theory, you should be helped by it. 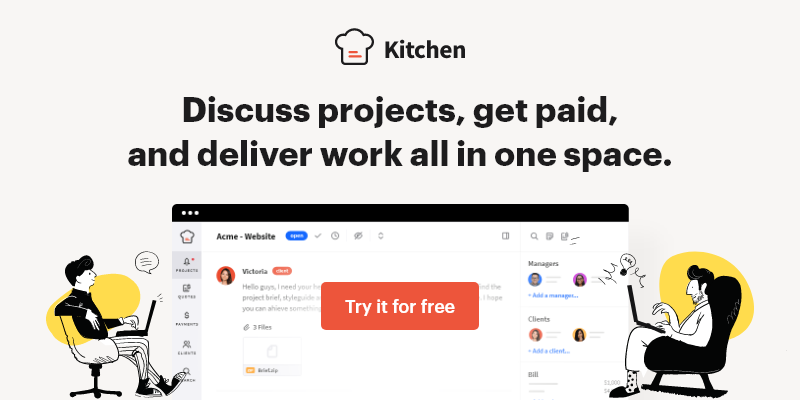